You're in for a right royal treat.

Part punk, part rock, part pop, hubbie and wifey duo Grand Duchy release a thoroughly eclectic debut. Petits Four is a strange species of LP. So varied are the nine tracks that only an extremely open-minded listener can seriously appreciate the entire body of work.

Black Francis (formerly of The Pixies) and Violet Clark have chosen to tread the path less trodden. Skipping genres ruthlessly, the pair have created nine very individual tracks- some of which you are likely to love, some you’ll probably hate. Petits Fours is all about taste.

Just to confuse matters entirely, The Long Song crops up with brilliant 80s synthesiser and electric guitar while Violet goes all chameleon and switches on a punky vocal vibe. Phew.

Then there's that leaked track, Fort Wayne. An undeniable standout with its addictive ''la-la-las'', this laid-back melody hears Black turn cheesy with his 60s pop/rock vocal (a la The Beach Boys) while Violet teases with her French whisperings. It's easy to see why, after producing this, their first track, Grand Duchy continued with their 'experiment'.

If you're a metal purist or you only listen to feel-good rock, then you're best off purchasing just a handful of Grand Duchy tracks. If, however, all of the above and much more floats your boat, you're in for a right royal treat. 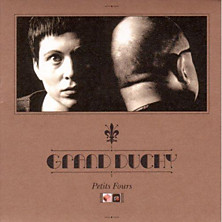