A work of stringent originality performed by an ensemble that deserves to be heard.

Any new music coming out of Australia that melds elements of jazz improvisation, contemporary classical composition and minimalism is inevitably going to invite comparison to the Antipodean piano/bass/drums trio The Necks. Said combo has been doggedly pursuing exactly that combination, to great critical acclaim, for more than 20 years. It’s to Melbourne-based trumpeter Peter Knight’s credit that, leading this all-Australian sextet, he explores similar regions yet still manages to come up with something fresh and distinctive.

Unknowness 1, with its throbbing two-note bass riff, is as close as Fish Boast of Fishing comes to The Necks’ rumbling momentum. Across the other five tracks, Knight makes full use of a larger instrumental palette to explore more nebulous shades. Moreover, it’s an indication of Knight’s confidence as a composer that he gives the other instrumentalists quite so much room to breathe. The title-track begins the album with spacious, unhurried improv’ – lingering silences strung together by scattered, Morton Feldman-esque piano chords – to which it takes Knight a full five minutes to add the trumpet’s voice. When he does, it’s a low-key, muted and breathy tone somewhat reminiscent of Arve Henriksen’s maudlin, flute-like call (which, itself, can be seen as a development of Miles Davis’ introspective quest). Indeed, at times, the ensemble’s work here recalls the improvised dreamscapes Henriksen helped to make with Supersilent – albeit without quite so much of the latter’s dark, cosmic loneliness.

Erik Griswold’s prepared piano is a major presence across the album: on Unknowness 2 it flits between echoing the brittle saz of Lloyd Miller’s Iranian folk-jazz hybrid, and the chiming hammered dulcimer of Dorothy Carter. And on Short 2, there’s a counter-intuitive, aleatory quality to Griswold’s note clusters that suggest some of John Cage’s games of chance. Percussionist Vanessa Tomlinson also adds unusual timbres with rattling, metallic percussion that neatly complements the piano’s dampened ping. It’s only on And Men Are Caught by Worms that the somewhat cerebral mood is shattered, with stabbing percussive bursts interspersed with snarling near-silence and smeared with Knight’s miasma of laptop electronics and Adam Simmons’ gurgling, gastric bass clarinet.

Fish Boast of Fishing is a serious work of stringent originality performed by an ensemble that deserves to be heard much more widely. 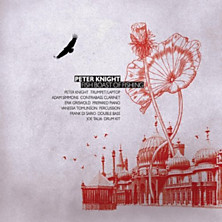