Alan Gilbert admits that of all six Nielsen symphonies the Third does the most for him. So can he, in the Sinfonia Espansiva’s centenary year, provide the long-awaited ‘has-it-all’ performance that the piece so thoroughly deserves?

Gilbert gets tantalisingly close on this, the first disc of his new live Nielsen cycle with the New York Philharmonic. He conjures the fizzing atmosphere of Herbert Blomstedt’s famous San Francisco recording, without its faults: we hear the counterpoints, not just the top line, and we get four considered lessons in the meaning of the word “expansiveness”.

In the opening Allegro Gilbert maintains his well-judged speed past the big moment of rupture at bar 388 (5:52), where plenty of others slow slightly for effect. It still grips you because Gilbert gets the contradictory factions of the orchestra to bounce off one another effervescently. For the gorgeous Andante pastorale – music that lies on its back and looks up at the sky – Gilbert has luminous vocal soloists who plant their contributions in the soil of the surrounding orchestral parts.

Where Gilbert really scores, though, is in the tricky Allegretto. He points its game-play in the direction of the symphonies still to come (particularly the Sixth) and from bar 120 to the end builds a kind of multi-layered, arching meta-phrase. The ugly duckling of the symphony is suddenly its subversive heart, and just as expansive as the music that surrounds it.

Gilbert’s take on the Second Symphony sets him apart further still. He pushes and pulls at his speeds in the first movement (brisk first subject, broad second subject) and throughout. He has his players – particularly strings – dig deep into phrases and find shape even in static chords. It makes for a second movement that seems to create its own time and space and a patient Andante Malincolio that unfurls like a Mahler Adagio.

Counterpoints that grind rather than dance, the weight and depth of the New York Phil’s sound and Gilbert’s ear for Nielsen’s symphonic mapping really make these recordings. These are rich and hugely enjoyable performances that add to the undernourished interpretative debate around Nielsen like few others have. 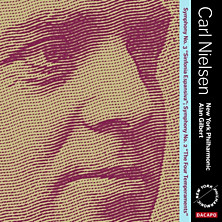