Singles charts Suede's rise from mesmerising indie newcomers to guitar-pop veterans - and demonstrates that the band have always been one step ahead of the competition.

In 1992, Melody Maker proclaimed Suede "The Best New Band in Britain". At that point the band hadn't even released an album. Heck, they hadn't even released a single! Now, it wasn't the first time the music press had got a little bit over-excited about a band, and it certainly won't be the last - but how many of those bands are still going strong 11 years down the line? Not many, that's for sure. Suede aren't your average band, as this Singles anthology testifies.

There are some quite brilliant tunes here; "Beautiful Ones", "Animal Nitrate", "Trash", "The Wild Ones". The list goes on, in fact this album sounds like an authoritative lesson in how to release singles. From the very first, "The Drowners" (released in 1992) to current single "Attitude", Suede's chart offerings have always oozed a kind of sexy suburban charm.

Lyrically, there's not a lot to get excited about; mainly sex, fashion, and suburbia, but this does create a cohesion that's often lacking in compilations such as these. That's not to say that Suede's music hasn't evolved over the years. On the contrary. New tracks "Love The Way You Love" and the aforementioned "Attitude" sound like a band in full creative flight, exploring new ideas, and looking to the future.

Too often bands release compilations that don't really reflect the quality of the material they're picked from (Manic Street Preachers, take note). By releasing Singles Suede have done exactly the opposite. Reminding us how great they were, how great they still are, and promising greatness yet to come. What more could you possibly ask for? 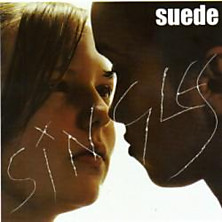