Glorious just about sums Silent Alarm up. From the outset, this album is a remarkable,...

The minimalist efficiency of Bloc Party's shiny new website speaks volumes about this band. There's no self-glorification and no hard-sell behind London's brightest young things, no pomp and no pretence. They describe themselves, rather awkwardly, as 'an autonomous unit of un-extraordinary kids reared on pop culture between the years of 1976 and the present day'. This is no cunningly-crafted press spiel; it's an honest statement of intent.

It's not surprising that Bloc Party are keen to declare their autonomy and shirk off musical comparisons. Since late 2003, they've had the 'new Franz Ferdinand' tail lazily pinned on them by all concerned. Flattered as they must be by this new-found fame, it's clear that Bloc Party would rather their long-awaited long-player Silent Alarm did the talking.

Glorious just about sums Silent Alarm up. From the outset, this is a remarkable, truly inspirational work. Though the angular strut of dance-floor fillers "Banquet", "Helicopter" and "Luno" may satisfy the current punk-funk vogue, Bloc Party are equally adept at sanding down the rough edges and smoothing out the angles. "This Modern Love", "Blue Light" and latest single "So Here We Are" are three of the gentlest, most touching ballads to come out of London in a long time.

That said, even on these tender tracks there's a distinct sense of urgency that might just become Bloc Party's trademark. It lies at the heart of the album, in Matt Tong's relentlessly creative drum patterns and frantic fills. Bucking today's trend for a 'plug and play' sound, Russel Lissack's effects-laden guitar - evocative of Radiohead's Johnny Greenwood - is given free reign to explore.

Together, Bloc Party exude exactly what they proclaim on the album's centrepiece, "The Pioneers": 'A sense of purpose and a sense of skill'. Despite the absence of early single "Little Thoughts", Silent Alarm feels complete; it's an astonishing, confident and infectious debut. 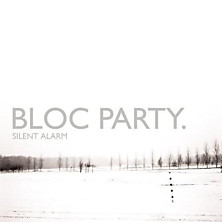