Compilation from Malian blues legend (selected by the man himself).

A well-known voice on Bamako radio since Independence in the early 60's with classics such as "Kar Kar' and 'Mali Twist" (both freshly re-recorded here), Boubacar took almost twenty years out of the music business to make a living and raise his familly, making a dramatic reappearance on Mali TV in 1987, only to move to France two years later in the wake of the death of his wife Pierrette. There, he was 'rediscovered' for a second time, on this occasion by the bourgeoning 'world music' industry. Several albums on Philippe Conrath's Label Bleu Records and Ibrahim Sylla's Syllart imprint followed,the cream of which are gathered on this collection.

An additional advantage - and selling point- is that Boubacar himself was invited to make the selection. Thus several unissued cuts and alternate takes appear that would not otherwise have seen the light of day, as well as some surprising songs that might not have been first choices for an 'outside' compiler. Bizarrely, there's even a track that isn't from a Boubacar album at all, but from chanteuse Rokia Traore's album Wanita ("Mancipera").

Of the recreated 'oldies', "Kar Kar Madison' and 'Mali Twist' stand out, whilst 'Bebe Bo Nadero' , 'Macire' and 'Les Enfants Du Pierrette' all mark out the 1999 release Macire as perhaps Traore's strongest and most consistent album to date. Other highlights are the elegaic 'Santa Maria', and the previously-unreleased 'Maou Leye Mara', with its unusual (for Traore) electric guitar figure in the background.

Listening to artists like Boubacar Traore and his compatriot Ali Farka Toure, it's not hard to see why it's now commonly accepted that the Blues probably had its origins in Mali's moody, modal string-instrument traditions. But that shouldn't cloud the fact that the music has continued to develop - at a leisurely pace - in the meantime, and that Boubacar Traore's stately, affecting acoustic guitar and unpretentious, story-led vocals are just about as satisfying as it gets in downtown Bamako, Y2K-style. 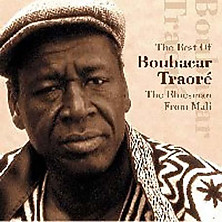