The Zutons Who Killed The Zutons? Review

As intoxicating and addictive as vodka jelly.

First things first - apparently, Zuton is a planet. The unit of currency on Zuton is the Zut. One Zut equals 100 Ziddies. That's according to a Maths lesson you might find if you search for this band online. God bless the Internet. Wherever The Zutons dug up their moniker, it's by far the best band name to crop up in ages. And it has to be said - Who Killed the Zutons? ranks pretty highly on the all-time riskiest debut album titles chart. Are the Zutons tempting fate, perhaps? Well no, not really. This is an ambitious but fully accomplished debut that promises good times are ahead for the Liverpool five-piece.

The record kicks off with "Zuton Fever", a live favourite and sure-fire attention grabber. Built around a riff that's as intoxicating and addictive as vodka jelly, its scatty saxophone stabs and zombie bassline serve as a personal invite to planet Zuton. Yet it's rather difficult to describe the musical melange one finds there. Frontman and songwriter David McCabe classes the band's sound as a 'soul-funk-voodoo vibe' (see "Dirty Dancehall" and "Zuton Fever"), but touches of ska and country are also discernable. Regardless, it's certainly a refreshing and inventive approach that makes previous comparisons with labelmates The Coral seem both unfounded and unflattering.

Breakthrough single "Pressure Point" does remarkably well to blend irresistible disco rhythm (including requisite cowbell and handclaps) with modern-day edgy guitars. "You Will You Won't" is an equally impressive follow up that sees the band stomping along with a cocksure Merseyside swagger. Literally: drummer Sean Payne is aided in the song's middle eight by the boom of communally stamping feet.

While the album's highlights are undoubtedly its funkier (and indeed, punkier) moments, it also has its fair share of soulful, downbeat tracks. But where "Confusion" and "Not a Lot to Do" are sincere and full of Liverpudlian charm, "Railroad" seems rather twee and contrived. Nonetheless, this is a confident collection of songs, done justice throughout by ex-Lightning Seed Ian Broudie's crisp and uncluttered production. On the strength of Who Killed the Zutons?, the band shouldn't worry about watching their backs just yet. 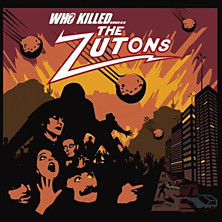