Business as usual: sprightly, hummable and a lot of fun.

Stereolab signalled that they'd gone on indefinite hiatus a year and a half ago. Given the lack of innovation or progression shown by the group's recent recordings, this was seen to be something of a relief. So does the oddly titled Not Music hold any surprises? Yes and no: Stereolab's signature sound is very much present and correct, but this record doesn't sound like the last gasp of a long-lived and generally much-loved band. It's business as usual: sprightly, hummable and a lot of fun.

The level of energy apparent on Not Music can be explained by the fact that it was recorded long before the group's retirement in early 2009, with half of the sessions being released as Stereolab's previous album, Chemical Chords. Everybody's Weird Except Me sounds unsurprisingly like it was teleported straight from the 60s, Lætitia Sadier's winsome vocals drifting earnestly over the upbeat rhythms that unwind like busy clockwork. Equivalences is another soundtrack to a Nouvelle Vague film waiting to be made.

Silver Sands is Not Music's 10-minute centrepiece and it comes on like a Krautrock I Feel Love with a pulsing rhythm that wouldn't be amiss on a Neu! or La Dusseldorf album. At times, particularly early on, there are even hints of analogue heaven worthy of Kraftwerk circa Autobahn. Two Finger Symphony puts its digits to excellently catchy use, while Delugeoise intensifies the pace significantly.

The album concludes with an Atlas Sound remix of the deliciously titled Neon Beanbag, a thrumming whirl of a song that fittingly races to a standstill for nearly eight minutes. On the at times rambunctious evidence of this, Stereolab's 12th album, let's pray there'll be a 13th at some point in the not too distant future. If that doesn't prove to be the case, Not Music makes for a characteristically fine epitaph. 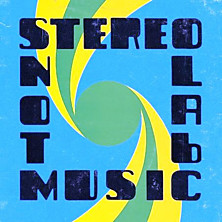