A beautifully focused recording, regardless of who actually wrote it.

We’re dealing here with a work of both confusion and delight, Claudio Cavina and La Venexiana revelling in exalting our senses while undermining any certainties. For a start, L’Incoronazione di Poppea is by Monteverdi, right? Wrong, it seems. Almost all the evidence shows that he had little or no direct involvement, that most of the music certainly isn’t by him – especially not the blissful climactic love duet. What we may be looking at is “school of Monteverdi”, where the music was supplied by his entourage, the likes of Cavalli (who probably wrote that love duet), Ferrari, Sacrati, and (inevitably) Anon.

It was supposed to be called Il Nerone originally; The Marriage of Poppea was only the alternative title, but if it says L’Incoronazione… and Monteverdi on the spine, at least all will know where to find this fabulous new recording. The notes go into all of these issues, and also the quirks of the Naples manuscript they use, its provenance, how they’ve completed it, why they’ve made cuts, and where they’ve added instrumental passages to cover scene changes for modern audiences. Then there are our misconceptions about instrumentation: no winds, just strings and a lavish continuo section; and the voices themselves, and that vexed question of replacing the castrato. Cavina uses women’s voices – there’s no need to transpose Emperor Nero downwards just so that he can be sung by a tenor – while the comic roles of older women are sung as they would have been originally, by men.

None of which would matter if the results weren’t as eloquent as the arguments – and they are, triumphantly so. The rather unsavoury tale of Nero’s infatuation with the courtesan Poppea, her social climbing at the expense of her former lover or anyone else who stands in her way, is delivered with such passion, brilliance and vitality that the performances seem to leap into life before us. Roberta Mameli as Nero is as imperious as you could wish, and Emanuela Galli’s Poppea is believably seductive; the way they linger over the final love duet is extreme, but utterly entrancing. As Poppea’s old Nurse Arnalta, Ian Honeyman proves a real scene-stealer, but the most colourful turn of all is the instrumental group, whose continuo playing and musical punctuation is deliciously colourful and joyfully flamboyant, a constant source of delight and fascination.

The recording is beautifully focused, and I can’t wait to hear it again, whatever you decide to call it, and whoever it’s by. 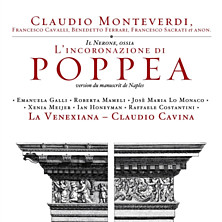