The second instalment in this handsomely packaged but vaguely pointless series finds the Stones moving away from blues and Chuck Berry covers and hitting their stride as one of the prime singles bands of their era.

You'll be familiar with the A-Sides, of course. Kicking off with ''(I Can't Get No) Satisfaction'', this collection traces the Stones' evolution into perfect chroniclers of their era the pocket psychodramas of ''19th Nervous Breakdown'' and ''Paint It Black'', the social commentary of ''Mother's Little Helper'', the psychedelic whimsy of ''She's A Rainbow''. Classics all, but can there really be anyone who doesn't own most of these already?

The B-sides for the most part don't measure up to the glories of their flips, but there's still much to cherish here for Stones collectors. Many of them find the Stones harking back to their blues roots, whether it's on the Slim Harpo style stomp of ''Who's Driving Your Plane'', or the more laid back ''The Spider and The Fly''. There are also a couple of lesser pop gems, such as ''I'm Free'', memorably revived by Bellshill indie chancers The Soup Dragons, and the airy fairy ''Dandelion'' from their brief flirtation with flower power. The latter, of course, was only a B-side in the UK - in the US it reached the top 20 in its own right.

Personally, this reviewer is a big fan of The Stones psychedelic phase - there's something gloriously incongruous about hearing Big Bad Mick forsaking his butch blues boy act for songs about love, flowers and rainbows. ''2000 Light Years From Home'' remains the perfect flip side to the marmalade skies of the benign flower power revolution, it's swirling mellotron and ominous bass riff carrying the song into dark nebulae of alienation and loneliness.

Altogether, it's a great collection of music, but whether you want to fork out over 30 quid for some nice packaging is another matter. If you do, you'll probably end up burning them all onto a couple of CDs anyway - the music's certainly worth the effort. 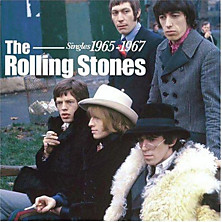