The fusionists are displaying increasing sophistication in their arrangements.

It’s now a decade since brothers Zac and Ethan Holtzman founded Dengue Fever, after meeting Cambodian karaoke singer Chhom Nimol at a nightclub in LA’s ‘Little Phnom Penh’ neighbourhood. Over the course of five albums and two EPs, their fusion of Cambodian pop, Californian surf/garage rock and more has blurred the artificial boundaries between world music and pop/trash culture with plenty of style and humour. Opting to produce themselves on this latest studio album happily hasn’t dimmed their offbeat charm; it’s a tuneful, diverse and often witty addition to their discography.

Cannibal Courtship also showcases an increasing sophistication in the arrangements, most noticeable on the only instrumental, the noir-ish Kiss of the Bufo Alvarius – named after a poisonous, psychoactive toad. Throughout, David Ralicke’s brass and woodwind contributions are especially noteworthy. Fortunately, Ethan has kept his trademark Farfisa noodling bubblegum-simple, and vocal trio The Living Sisters are welcome guests, adding sugary "pah-pah" backing to the suavely sinister title-track, which kicks things off confidently.

It’s the first of several songs Nimol tackles in English – having obviously learned a bit more since she started working with the band – but fortunately she still also sings in Khmer, which keeps Dengue Fever sounding distinctive. When she juxtaposes her verses in Khmer with Zac’s slightly nerdy English choruses on the funky Only a Friend, the effect is quite comical, but it exposes a slight tendency the band have to repeat their vocal hooks a little too often – something also apparent on Thank You Goodbye.

Much of the humour is surreal, throwaway slapstick, as on Cement Slippers, which sounds like The B-52s in an argumentative mood ("My girlfriend loves everything at the beach / Except the water, the sand, and the sun"). Family Business takes a pop at the arms trade in the scathing tradition of fellow Californians the Dead Kennedys: "Heat seeking missile from heir to air / It’s just a family business." Even so, there’s a darker, more reflective side to their music on songs in Khmer such as Uku and in particular Sister on the Radio, which hints at the painful recent past of Cambodians forced to become refugees. 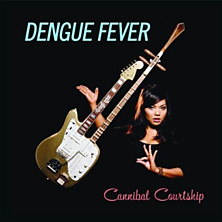