An engrossing, beautifully produced album from a player and composer to watch.

Marius Neset has been hailed as “the most talented Norwegian saxophonist since Jan Garbarek in the 1960s”. This is his second album as leader, following 2011's critically hailed Golden Xplosion.

He's joined once more by Jasper Høiby on bass and Anton Eger on drums. But this time Ivo Neame replaces Django Bates at the piano and Jim Hart is added on vibes. (Neame, Høiby and Eger also operate as the much-lauded trio Phronesis).

The focus is as much on Neset's writing and arranging skills as his saxophone. On most of the tunes the basic unit is joined by a slightly unusual combination of accordion, flutes and brass, giving a surprising, almost orchestral density and range.

We're five minutes in to this track before the leader takes a solo. He's a technically immaculate player, very much in the Michael Brecker mould.

Possessed of a big, supercharged sound on the tenor, astonishing control and a steady stream of ideas, Neset shapes confident, pushy and questing solos over the fleet, pin-sharp playing of the rhythm section.

Neset's compositions are eclectic, even symphonic: Birds ends with a passage for flute and brass that could come from Gustav Holst. Reprise builds from stately, swelling brass chords, peppered with bursts of tenor, to a surprisingly chaotic and slightly psychedelic finish.

Boxing begins as a fiendish rhythmic workout reminiscent of Dave Holland or even Anthony Braxton, before ending up as a breezy slice of tuneful acoustic fusion that Pat Metheny might be proud of.

Fields of Clubs follows a similar pattern, while The Place of Welcome is a comparatively restrained, pastoral feature for Høiby's nimbly lyrical double bass.

Neset and his band are easily the equal of a lot of American players treading similar paths, and it'll be interesting to see where he goes next.

He sounds fully formed as a player already, which certainly wasn't the case with the young Jan Garbarek, who in the 1960s was still refining and redefining his approach to the instrument.

Anyway, this is an engrossing, beautifully produced album from a player and composer to watch. 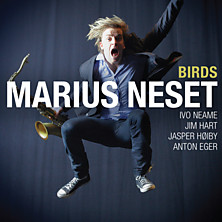