An impressive debut album with the focus firmly on Ferguson's great voice.

She came second to Matt Cardle on last year's X Factor, but unlike her hat-clad vanquisher, Rebecca Ferguson has yet to criticise her alma mater or claim "there's a lot of conspiracy" to the events of 9/11. The 25-year-old Liverpudlian has conducted herself in a fashion unexpected from a talent show star – with dignity.

That quality is writ large on this impressive debut album. Featuring production from the likes of Eg White (Adele), Wayne Hector (Westlife) and Fraser T Smith (James Morrison), Heaven is a collection of classy adult pop songs dressed in vintage soul clothing. Comparisons to Amy Winehouse and Duffy are inevitable, and not unwarranted, but the most obvious reference point might be the underrated output of Gabrielle – think back to her 1996 hit Give Me a Little More Time.

Yes, it's as cutting edge as buttering bread, but Ferguson wields the knife with conviction. She sells everything from the piano balladry of Teach Me How to Be Loved to Fairytale's slinky Philadelphia soul to funkier, Motown-leaning moments like Mr Bright Eyes. She even nails the string-draped melodrama of Fighting Suspicions, which almost suggests what a Dusty Springfield Bond theme might have sounded like.

Shrewdly, those experienced production hands keep the arrangements lush but unobtrusive; even when her songs are embellished with strings, horns and Dusty in Memphis-style backing vocals, the focus remains firmly on Ferguson's voice. It's a terrific instrument – as rich, strong and flavourful as posh coffee, and entirely free of melisma.

In fact, Ferguson's singing is impressive enough to disguise the odd tired line about butterflies and wild horses or wine and roses. But though she may be a romantic, she's no sap. Witness this insight into a scrappy relationship on Shoulder to Shoulder: "I get a kick when you worry / That you're just no good for me."

Most of these songs concern some kind of romantic entanglement, but it's an exception that supplies the most prescient moment. "[It] won't buy you happy when you've been bought and sold," she warns on Glitter & Gold, a parable for "people who are very ambitious". It's wise advice that, like this album as a whole, suggests Ferguson is far more Will than Gareth. 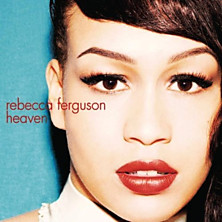