British trio sets themselves up as ones to watch with a captivating second EP.

The revived R&S label, responsible for discs from James Blake and Pariah since its rebirth in 2006, goes from strength to strength with the release of the second Vondelpark EP, a five-tracker that furthers its makers’ vision from the sunken-ship beats and washed-out atmospheres of their debut set, 2010’s Sauna. The act in question are fairly mysterious sorts – search online and you’ll find a give-nothing-away interview from last year, and a selection of official (and not) video clips accompanying songs from this release and its predecessor, but actual concrete facts are in short supply. But this just adds to the appeal: the listener is able to attach their own faces, their own meanings, to music that exists somewhere between what’s commonly termed chillwave and something rather more satisfying of soul. It’s How to Dress Well with a slightly superior budget; RnB for heartbroken bloggers more likely to send a loved-one files than flowers.

Opener TV sets a tone that’s maintained – one of greater clarity than Sauna’s blurry vocal lines and misty guitars, where lyrics can be heard clearly enough for interpretation to exist either on a literal or metaphorical level. Who the "she" is, who’s on TV, isn’t made apparent; and it doesn’t matter. Vondelpark’s words are but markers for their music to twist around, points in space that show the way towards fulfilment. They are page numbers in a chapter, there to track progress, ensuring that the narrative – such as it is – doesn’t wind its way so far beyond the horizon line that it becomes unmanageably self-serving, listener enjoyment a barely-there afterthought. That said, it stretches for about as far as it should, and not a second more; likewise Camels, which sits centrally in this collection as a fulcrum upon which the surrounding four seesaw, essentially a distillation of everything Vondelpark present in a captivating, encapsulating five minutes.

Closer Hipbone inserts something that might be classed funk, albeit of an underwater variety, into proceedings, but its bump doesn’t come with the standard low-end mass. It moves slightly, slowly; Vondelpark remain light on their feet throughout, perhaps afraid of settling too long into a rhythm that might become tiresome. That’s not to say that nyc stuff… is ripe with variety – it’s not. But the nuances that are spot-lit on each number are different enough, unique enough, within this outfit’s chosen field to warrant repeat visits. Like haunted Drake instrumentals, or The Weeknd’s RnB-(e)mo stripped of its club-spawned hangover, these tracks seep into the system with a rare ease that leaves the listener in no doubt that this Surrey/London trio will start 2012, assuming a debut long-player is on the agenda, as ones to watch. 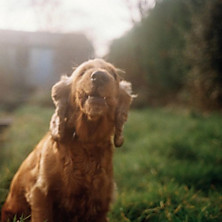