Comeback album from the acceptable face of British prog rock.

Along with King Crimson (at least in their mid 70s incarnation), VDGG were the prog band it was (almost) OK to like, and certainly one of the very few that exerted any influence on the punk movement.Certainly fans of Jethro Tull or Yes were unlikely to find much cosmic solace in the dark, labrynthine psychodramas that Peter Hammill and his chums turned out in the 1970s. VDGG music was brash, complex, difficult; their performances were driven less by instrumental flash or laser light shows than sheer, desperate energy and an uncompromising intellectual clarity.

And now they're back. This line-up (Hammill, Hugh Banton, David Jackson, Guy Evans)last recorded together thirty years ago, but you wouldn't know it. Recorded pretty much live, this powerful, sometimes ragged music recalls old glories and turns up quite a few new ones too; it's the sound of a band rediscovering themselves and liking what they find.

Disc 1 is given over to songs and opens with "Every Bloody Emperor", a stinging attack on the increasing distance between our leaders and their subjects. As ever, Hammill's polemics are passionate but unclouded by sentiment,and there's an extra kick to his considerable vocal prowess given by the presence of his old bandmates.

When Banton's trademark bass pedals surge into earshot and Hammill whips out his guitar for a spot of skronk, things step up a gear. "Boleas Panic", "Nutter Alert", "Abandon Ship" and "In Babelsberg" are the match of anything this lineup came up with back in the days of Godbluff or Still Life. Muscular,literate and visceral, this'll have long term fans grinning from ear to ear as Hamill spits out dense wordplays over lurching, shuddering riffs or hymnnal atmospherics.

The band's sonic fingerprint remains as distinctive as ever. Jackson remains one of the few saxophonists ever to have done anything worthwhile in a rock context, while Banton's skills mark him out as possibly the only keyboard player in the prog world to have the rare combination of taste and sensitivity as well as technique. Evans is both primal and octopoidal, while Hamill is still one of the most distinctive and intelligent voices in British rock music, period.

Disc 2's improvisations are no less involving. Though VDGG aren't quite the match of, say, Crimson in that department, there's an audible openness and trust between these four fifty-somethings that's a rare thing these days. They're still willing to push the envelope a little, and bless them for that. More please. 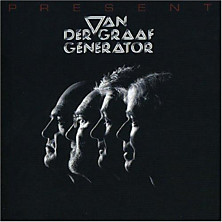