The Beat I Just Can’t Stop It Review

The Beat’s greatest strength was also their biggest weakness. Dave Wakeling was a superb bandleader and songwriter, bringing Elvis Costello-like intelligence to the Birmingham sextet’s bouncy mix of punk, reggae, calypso and pop. But, in a British pop era dominated by charismatic eccentrics, Wakeling was a sullen and unprepossessing frontman.

As the DVD of TV appearances that form part of this comprehensive reissue proves, once you saw The Beat in 1980, all you remembered is how much you loved, feared or fancied Terry Hall, Kevin Rowland and Suggs.

Which is perhaps why only this debut album has found a place in British music’s fickle memory banks. I Just Can’t Stop It, with its delicious claret, white and black pop-art cover and relentless danceability, feels entirely comprised of hit singles (and six of the 12 tracks were, including double A-sides). Its fusion of black and white musical influences and anti-racist defiance makes it as perfect an example of the 2 Tone era as anything by The Specials or Madness.

Because of Bob Sargeant’s tough and simple production and its historic place as the first digitally recorded album, it hasn’t dated. And this despite the presence of anti-Thatcher anthem Stand Down Margaret, which now sounds like one of pop’s most futile gestures.

What quickly undid The Beat, apart from Wakeling’s lack of X factor, was the increasing disconnect between the catchy, carnivalesque music and morbid, self-lacerating lyrical themes. When 1981’s Wha’ppen? and 1982’s Special Beat Service – also deservedly reissued here with a slew of bonus material – failed commercially, The Beat split, with Wakeling and Roger going on to minor US success as General Public, and bassist Cox and guitarist Steele hitting the mother lode alongside Roland Gift as Fine Young Cannibals.

As with the majority of post-punk bands, The Beat’s natural sense of musical adventure and bleak worldview wouldn’t mesh comfortably with 80s pop’s rediscovery of glam aesthetics and upward mobility. But I Just Can’t Stop It remains one of British pop’s most lovable and ebullient albums, and the kind of politicised party album they just don’t make anymore. 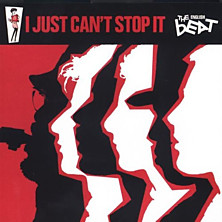