Maximum Balloon is exactly what you might expect from a David Andrew Sitek side project. Since emerging with Brooklyn’s too-cool-for-school TV on the Radio and going on to produce debut albums by Scarlett Johansson and Foals, Sitek has operated in that enviable space where one’s name becomes a byword for hipness while no-one really knows what you look like. His ability to shape dark yet entirely accessible soundscapes that touch on electro, soul and black pop while retaining the otherness of art-rock make him the perfect person to present a multi-vocalist set that occupies a dinner party-friendly middle-ground between Gorillaz and Mark Ronson.

If that reads like backhanded flattery, well, it’s meant to be, but only up to a point. Sitek’s dense and detailed manipulations of synth-pop and line-up of interesting vocalists ensure that Maximum Balloon is never bland. It’s simply that, in deliberately contriving music he sees as lighter than his TVOTR exercises in soulful disquiet – hence the project’s title – Sitek has favoured an arty take on pop, rather than dirty his hands with pop itself. Maximum Balloon makes an impressive noise. But it struggles to make one feel anything more than impressed. 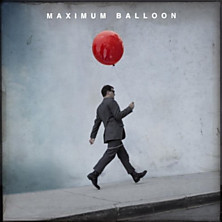