14 years on from his disappearance, Manic Street Preachers put music to the words of Richey Edwards, on an album of what look likely to be his swan songs.

Imbued, as it always would be, with nostalgia, intensity and emotion, approaching Journal For Plague Lovers is both an uneasy and exciting prospect. Lyrically his, musically theirs, the Manics' ninth studio album breaches chronology and sits easily between The Holy Bible – Edwards' last with the band, and its follow-up Everything Must Go.

The words are expectedly potent in their retrospective insight. She Bathed Herself In A Bath Of Bleach condemns the corrosion of love, while All Is Vanity spews frustration: ''Makes you feel like I'm talking a foreign language sometimes/ It's the facts of life sunshine''.

Shellac man and well-credited producer Steve Albini has astutely allowed this album to be what it is, and thus some songs, including the title track and Pretension/Repulsion are unadulterated, classic Manics. Marlon J.D, a tribute to the tormented celluloid legend, is driven with such instrumental veracity as to render it one of the standout offerings on the album.

The benefactors of Edwards' remaining unexpressed ideas have found a fitting vehicle to carry them to an audience, and the dual edge of final track William's Last Words and hidden extra Bag Lady is inspired. The former, reflective but far from maudlin, combines subtle strings and Nicky Wire's fragile, artless vocal. No one else could rightly sing the lines, ''Good luck my sweetheart/ You're the best friends I ever had''. Fittingly, the mood is immediately dissolved with the visceral, riff-laden secret track, and with the parting words, ''Eternity is not a sunrise'', and a symbol crash, he's gone.

Journal For Plague Lovers is enigmatic, engulfed, enraged, both intensely perceptive and painfully confused, musically and lyrically fervent, and a lasting touchstone for all those who will experience the same. 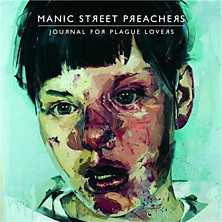