An impressive, graceful addition to the indie veterans’ catalogue.

When Buffalo Tom released Three Easy Pieces in 2007, following an almost decade-long hiatus, it felt like they’d never been away. A lot of this is no doubt due to the type of band they are – never showy or extravagant, theirs is a driving, solid, heart-on-sleeve indie rock that’s about as earnest as it gets. But that’s no criticism – Bill Janovitz’s voice is warm and weary, and his songs are comfortable in all the best possible ways. This windswept, simple aesthetic is perhaps best summed up in 1992’s Taillights Fade (from Let Me Come Over), which really should have been a world-conquering hit, such is its stately, anthemic quality.

Nineteen years later the band are in robust health, and Skins makes for an impressive, graceful addition to their catalogue. It also finds them joined by Throwing Muse Tanya Donnelly on Don’t Forget Me, a gorgeous, folky strum which could only have been written and performed by artists as seasoned as these. Elsewhere, The Kids Just Sleep and Guilty Girls bound along on sprightly guitar riffs, Paper Knife is almost a waltz, while The Hawks & The Sparrows taps into that widescreen sense of longing that the band encapsulated so well back in 1992.

The great thing about Buffalo Tom is how wonderfully far-removed they are from any sense of what is fashionable in the music industry. These songs are little self-contained worlds unto themselves – perhaps unremarkable at first; straightforward; lyrically upfront. Let them in, though, and they’ll enrich your life like a good short story, evoking the kind of blue-collar Americana that Raymond Carver dealt in so powerfully.

Here I Come sums things up pretty well: "Here I come / I dive right in / Here I come," Janovitz asserts over its chorus. The band doesn’t need to overreach, because it simply wouldn’t become them. Instead they just dive right in, and when the results are as well defined and enjoyable as this, you have to envy that a little bit. 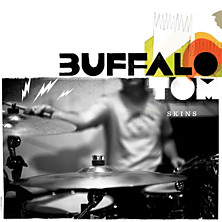