There are moments of beguiling brilliance on this fifth studio effort.

Having more or less perfected their sleek electro-noir with 2008’s savagely brilliant Velocifero, and distilled their career into the rapturously received Best Of 00–10, it’s natural that Ladytron would want to shake up their formula with this fifth album. Where previous albums have given equal weight to glacial vocals and buzz-saw electronica, on Gravity the Seducer the vocals are submerged deeper in the mix (dispensed with almost entirely on four songs), giving more space for the synths to layer, intertwine and generate friction. The result is an album which is less immediate than its predecessors, but more atmospheric.

The other deviation is far more surprising: warmth. If you had to pick three words to describe Ladytron in the past, chances are that "icy" would be one of them. Yet from the moment the seductive first single White Elephant opens, its keyboards chiming rather than cutting, its rhythm lilting rather than propelling, it’s clear that Ladytron have let some light into their previous darkness. This warmth is made literal on 90 Degrees and sealed by its hazy, languid sound and flutteringly pretty vocals. It sounds like Slowdive at their dreamiest, poppiest and most gorgeous.

Another surprise arrives with the instrumental Ritual. For all their cult electro status, there have been few Ladytron songs you could realistically dance to, but Ritual splices the DNA of Pet Shop Boys and Paul Oakenfold to lock into an irresistible and uplifting groove. The luscious near-instrumental Altitude Blues is a looser, more swirling creation, sounding a little like a lost ecstasy-fuelled reverie by The Orb.

Not that Ladytron have entirely abandoned their notoriously ardent fanbase; there are a few songs that sound much like the band of old. One of these, the theatrical White Gold, is an instant Ladytron classic, with its twitchy Knight Rider beats and menacing sugar-and-spite vocals. But on other songs where they stick to the old formula their heart doesn’t sound in it; both Ace of Hz and the gracelessly sung Moon Palace sound suspiciously like a band going dutifully through the motions.

Gravity the Seducer isn’t the ultimate Ladytron album, a title which still belongs to Velocifero. It’s too uncertain for that, with the slight wobbliness of someone injured learning to walk again. But there are enough moments of beguiling brilliance to suggest that if they stick to the new direction, the destination could be very exciting. 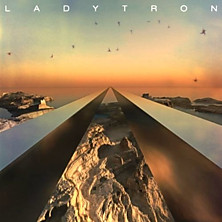