Two weeks after the release of Rihanna’s Rated R – a complex, adventurous pop record that presented a superstar fighting with fire after a difficult year – Chris Brown's comeback album arrives. This is a comeback in both senses, as a response to the woman he attacked back in February, from a man who has spent the time since trying to save his career.

Nevertheless, it's important to remember that Brown began this LP in 2008. "I don't want to be typical urban," he said last summer, talking excitedly about his glossy ambitions. "I want to be like... Prince and Michael Jackson and Stevie Wonder." Graffiti is full of sparky collaborators who could help make this happen, from Lupe Fiasco and Lil Wayne in big-budget supporting roles, to reggae group Rock City and Dutch electro-pop singer Eva Simons, with whom the 20-year-old RnB star tries out new sounds.  But anyone expecting dazzling results will find mainly damp squibs – songs sputtering with faded 80s glitz instead of forward-looking glamour.

In Brown's brave new world, only two sorts of track exist: slinky RnB body-poppers and cheesy, breathy ballads. Most of them come swaddled in AutoTune – how very groundbreaking – and the songs that sound best (like the vaguely catchy I Can Transform Ya and Pass Out) sound like pale imitations of Justin Timberlake album tracks. Elsewhere, the prevailing mood is one of boyband pop by numbers. Crawl is a weak first attempt at an X Factor epic, while So Cold sounds like The Backstreet Boys limping quietly back to the drawing board. And then there's Take My Time, a song about sex that's so powerfully unerotic that secondary schools should use it to encourage celibacy.

It also quickly gets impossible to ignore Brown's pointed lyrics, especially in Famous Girl: "I don't wear no halo / You were first to play the game, though / Sorry I bust the windows out your car". And even if we ignore his protestations, Graffiti still lumbers, having few of the modern flourishes Brown kindly promised us (only the brief sigh of an accordion on I Luv U gives us sweet relief). Instead, plodding melodies draw attention to Brown's unpleasantly macho style and unapologetic sentiments, and the void where his talent, and his future, should be. 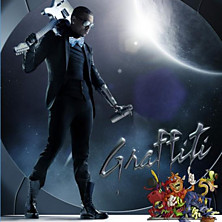