...The album is still more than the sum of its parts, much like the Big Smoke itself.

It’s an electric period for listeners keen to understand England’s capital city through popular music. Artists of all stripes are trying to encapsulate what it feels like to be part of the country’s most filthy, frustrating, hilarious and exciting manor.

The Good, The Bad and The Queen are barely acquainted with the claustrophobic paranoia of Bloc Party, far removed from the brash, tongue-in-cheek street reportage of Jamie T and a million miles from Lily Allen’s sweet ska-pop.

Yet this LP couldn’t be more London if it repeatedly claimed it was the best album in the world, talked only in rhyming slang and was closed at weekends for engineering works.

London evolves constantly due to diverse social, political and artistic influences. So it’s no accident that we have ostensible references to drug culture ('medicine man here 24/7…everyone on their way to heaven' from "Herculean"), Edgar Allan Poe ('Ravens flying across the moon' on "Kingdom of Doom") and Iraq. At least, that could be the conflict evoked in the line, 'Drink all day ‘cause the country’s at war'.

By the time it ends, after the angular, pummelling jam of the title track, this platter has also included beguiling references to Wormwood Scrubs and sounded like everything from a broken-down funfair to a lost dub-reggae cut.

Despite what its natives may purport, London is not perfect and so it goes with this. It lacks immediacy, only truly rewards after repeated listens and has few proper choruses: you’d be pushed to get a ringtone from it (though that may make some love it more).

Fela Kuti’s drummer, the former Clash bassist, The Verve’s lead guitarist, the main man from Blur/Gorillaz and Dangermouse, one of the world’s most in-form producers, behind the desk? Impressive one and all...but the album is still more than the sum of its parts, much like the Big Smoke itself. 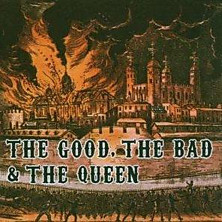