This isn’t a half-arsed attempt...

They emerged as eyeliner-daubed punks and grew into Britpop royalty, but recently things have cooled off for Wales's most successful band. The underappreciated Lifeblood was scorned by critics and fans alike but now, after Nicky and James took a breather with solo projects, the beige is gone, and the sun is back in the Manics hearts. Send Away The Tigers is not only a return to form, but the best album they’ve made since the mid-90s.

The overriding feeling here is one of grandiosity. Big sweeping choruses evoke the time when the Manics were the biggest band in the country. “Your Love Alone Is Not Enough” sings in the first blossoms of springtime with a perfect radio friendly hook and flashbacks of “You Stole The Sun From My Heart.” Teaming up with The Cardigans Nina Persson, it’s a utterly sweet sounding song but with tellingly bittersweet lyrics. ‘’Underdogs’’ swaggers with confidence as James Dean Bradfield’s distinctive voice rings out a call to the band’s traditional fanbase – ‘This ones for the freaks, for you’re all so beautiful’.

Simple yet effective, the Wire penned ‘’The Second Great Depression’’ builds from a slightly plodding chorus into a majestic chorus akin to the greatest songs from Everything Must Go but it’s the silly, almost cute ‘’Autumn Song’’ that would get even a Manics hater waving their hands about wildly. Layered vocals and soaring strings create a chorus that even Queen would be jealous of.

Silly as “Autumn Song” might be, ‘‘Rendition’s’’ reminds us that MSP are a band with a political conscience. From the strong military guitar solos through to lyrics like ‘the CIA will remain invisible’, the songwriting on songs like this and the glammy ''Imperial Bodybags'' show the band have lost none of their convictions.

It might have guitars but Send Away The Tigers is a brilliant pop record. Intelligent yet accessible, every chorus is intentionally bold and sounds like the band are enjoying themselves. This isn’t a half-arsed attempt, as Nicky himself said,’“I realised that The Manics had lost that element of fabulous disaster... And on this album, we've gone back to source’. 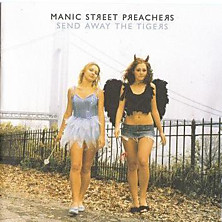