Sista K is pictured cupping her hands over her ears as if to say it’s all too much...

Marseille has a reputation for being France's most culturally integrated city and remained calm when race riots plagued others in 2005 and 2007. It seems appropriate that a band like Watcha Clan should emerge from this milieu, but just as politics and art aren’t always great bedfellows, their socially progressive stance and multiple stylistic reference points don’t necessarily make for great music. For quite some time, some cultural commentators have insisted that 'fusion is future'; whether or not that's true, mish-mash isn't.

With a sleeve that proudly boasts of songs in Arabic, Hebrew, Yiddish, French, English and Spanish, Watcha clan seem almost competitively multi-cultural. A cynic might say their overly eclectic approach attempts to jump on just about every world music bandwagon going, and like the proverbial jack-of-all-trades, they end up master of none. Diaspora Hi-Fi almost sounds like a 'various artists' compilation.

Drum 'n' bass and reggae are their preferred rhythmic templates, onto which they graft gnawa (Goumari), Balkan gypsy brass and Ashkenazi/Sephardic flavours (Balkan Qoulou, Marashtein, Tchiribim), Egyptian-style strings and rai flute (Les Courbes De Ton Corps), to name a few examples. Gypsy Sugar adds ham-fisted guest rappers. Main vocalist Sista K has one of those strident voices you'll either love or hate, and she's occasionally joined by Nassim Kouti on vocals and guitar, as on the rather lovely Arabo-Andalusian interlude of Ch'ilet La'Yani. The similarly peaceful intro to Oued El Chouli suggests Souad Massi before taking off into a dub reggae lope powered by Moroccan garagab castanets and accelerating into Sufi trance mode.

It's one of the few examples of a truly convincing marriage of styles on an album that otherwise largely struggles for focus. The bonus video of Eli shows the band in full flight, but the impression is that they had more fun making it that their audience did listening to it. The cover says it all, really; Sista K is pictured cupping her hands over her ears as if to say it’s all too much. There are quite a few moments on Diaspora Hi-Fi where you may well want to do the same. 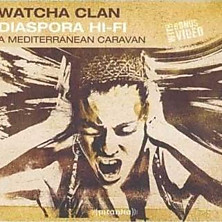