It's still a huge triumph in the face of overwhelming odds.

In the 15 years it's taken for Axl and co. to get these 14 tracks together the costs have spiralled so precipitously (and downloading habits have changed the market so massively) that Chinese Democracy will, in all probability, never make a profit. So, weirdly, in refusing to be hurried, and despite turning it into probably the last great rock folly of our times, now-46-year-old Axl Rose may have actually done something quite significant: struck a blow for the artist. Of course, this all hangs on whether Chinese Democracy is any good. At a work rate of less than a track a year you'd expect something awesome, wouldn't you? Well, it IS. By this we mean it's epic, preposterously overarching and all the things you'd expect from the ego that ate Sunset Strip.

This is an album with literally a cast of thousands. collaborations begun, dropped, seeds of ideas, mere trains of thought, they all get name checked in the sleeve notes. So yes, guitar freaks, Buckethead's here, and so is Brian May (Catcher In The Rye), and so are about twenty other guitarists. Piano ballads (Sorry), sweeping strings (adding just the right amount of throat lumpiness to Madagascar), multi-tracked shredding mayhem - it's all on tap. And on top the grizzled yelp that seems just as good as ever.

And don't let anyone tell you that Axl hasn't been keeping up with trends. A song like Better, starts with an r 'n' b-lite loop under a lonely voice; If The World's skittering beats and spanish guitar make it most danceable: expect a few illicit remixes to hit the clubs sometime soon. But that was always GnR's strength - they rocked hard, but they also had a canny eye on the big prize. Watching whether their universal brand still holds good after all this time will be a fascinating game to play in the weeks leading up to Christmas.

Of course there are times when Axl's perversity does over-egg things. Some tracks take a good minute or two setting up just the right mood while Madagascar's samples of both Martin Luther King AND Coolhand Luke are perplexing. But then you're dumped headfirst into the metal mayhem of something like Rhiad And The Bedouins and you remember why you loved this band all those years ago.

At the centre of all this sits Rose, suddenly big news again and amazingly able to hold up Chinese Democracy as at least the equal of all the talk its creators have been bandying about. No, it won't change the world and it doesn't contain any major innovations. But it's still a huge triumph in the face of overwhelming odds. You can breathe again now... 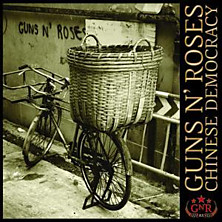