Talking books are infinitely more attractive than succumbing to this listless lift music.

Occasionally, one stumbles across a record that is truly unique, imbued with some elusive and potent ingredient that propels it beyond the ordinary into an exclusive sonic stratosphere which other music cannot reach. Stephen Emmer's Recitement is such a work – standing tall and proud as a leading contender for the title of the most bloated, pretentious release of the millennium to date.

Best known as an in-house composer for Dutch television channels, the Amsterdam-born Emmer has belatedly opted in his middle age to forego the restrictive world of sitcom jingles in order to demonstrate the full range of his breathtaking self-indulgence. The result is an album of what can loosely be described as soundtrack music (although one struggles to imagine a film that's comparably soporific) bolted onto a selection of spoken word performances in several languages by assorted film stars, musicians and writers. Some, such as Richard Burton and Allen Ginsberg, at least have the excuse of being dead to defend their involvement, but quite what possessed the likes of Lou Reed to lend their names to this putrid project is frankly inexplicable. The one small crumb of comfort is that the Michael Parkinson who reads Thomas Hardy's Invergence Of The Twain is apparently an American rapper rather than Barnsley's inimitable chat-show colossus.

Finding any yardstick with which to compare Recitement is difficult, but its nearest relation is probably William Shatner's legendarily awful The Transformed Man, featuring the square-jawed Enterprise captain's cringingly ham-fisted renditions of Shakespearean soliloquies and '60s classics against a backdrop of lukewarm, twittering psychedelia. But Shatner's efforts at least have a certain comedic charm that the po-faced Emmer singularly lacks.

Melodically lumpen, clumsily arranged, texturally tinny and thematically incoherent throughout, there really is little to commend this spectacularly bad record. Undeniably Emmer has selected some evocative passages of writing delivered by some wonderfully mellifluous voices, but there are surely innumerable better ways to enjoy a Paul Theroux travelogue or a Samuel Beckett poem than by wallowing wantonly in Recitement's capricious and conceited musical misadventure. Talking books are infinitely more attractive than succumbing to this listless lift music, which would probably send even the most slothful shopper sprinting for the stairs should any store be foolish enough to play it in their elevators. 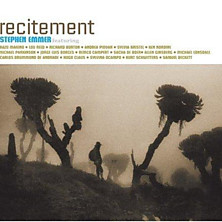