A splendid solo adventure from the multi-monikered OutKast rapper.

Frequently written off in favour of flamboyant other-half André ‘3000’ Benjamin, it’s high time people started singing the praises of Big Boi. As 50% of Atlanta, GA crew OutKast, the man christened Antwan André Patton played a pivotal role in bringing the hard-bitten soul of the dirty south to prominence during the late 1990s in the US.

And while fourth LP Stankonia made bona fide pop stars of the duo, it was 2003’s Speakerboxxx/The Love Below – a double album showcasing the work of either artist on separate discs – which spawned an era-defining single in Hey Ya! and established Benjamin as a rakishly-dressed, latter-day Prince figure for the hip hop generation.

Unfortunately The Love Below was less focused than the comparison would suggest, and in fact it was Patton’s Speakerboxxx which lent ballast to Dré’s whimsical, intermittently inspired flights of fancy, turning in the kind of colourful hip hop productions that helped make OutKast’s name in the first place.

Patton floated the idea of a solo record in 2007, but following issues with OutKast label LaFace/Jive he switched to Def Jam last year. Even worse, Jive decreed that tracks featuring vocals from Patton’s erstwhile sparring partner be left on the cutting room floor, meaning ‘net-leaked numbers Royal Flush and Looking 4 Ya are absent from Sir Lucious Left Foot. That’s a real shame – both Big Boi and Dré kill it on the former, while the latter could almost be a laser-focused Kanye joint minus the woe-is-me ass-clowning.

Nonetheless Sir Lucious Left Foot is a potent reminder of one of the more consistently inventive forces in rap 16 years since his debut. Given Patton’s rep as the conservative half of OutKast it’s easy to forget how damn musical his ideas are, like the mellow Rhodes piano that underscores Turns Me On’s supple west coast funk, or the horns that add cinematic gloss to the The Train Part 2’s outro.

Shutterbugg’s ice-cold electro is given a spacious, club-ready sheen by Scott Storch that’ll have the track bouncing ‘round your brain for months to come, while George Clinton even shows up on the Kraftwerk-gone-ringtone rap hokum of Fo Yo Sorrows. André 3000’s sole credit is as producer on the un-Dre-like You Ain’t No DJ, which has the coked-out, machine-funk feel of a Clipse track.

Meanwhile the heavyweight General Patton and heady, AOR-tinged Shine Blockas only confirm Patton as one of the best pop-leaning hip hop artists around. That OutKast comeback will surely be killer, but for now respect is due the way of this splendid solo adventure. 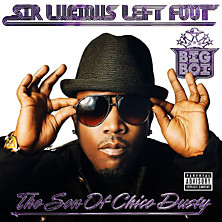