...Bursting with urgent squelches and a sensuous vocal.

Every once in a while a band comes along that really makes you sit up and take notice. So when Subpop records released a free download of a record called "Let's Make Love And Listen To Death From Above", the title alone was nearly enough for us to declare it song of the year without hearing a second.

CSS come from the city of Sao Paolo and have firmly placed the Brazillian electro scene on the map, paving the way for the likes of Bonde Do Role to follow through this year. Named after a quote from Beyonce who once declared she was "tired of being sexy", Lovefoxxx and her motley crew of bisexuals have constructed an endearingly haphazard album which cutely oozes DIY ethics.

Once you’ve got over the jaw-dropping beeps of “Let’s Make Love…” (enough to make any indie kid reach for the lasers), attention turns to the rest of the album as it darts wildly between styles, beats and languages. The somewhat demented “Alala” - a record Peaches probably wishes she could make - heads up the electro side of the album, bursting with urgent squelches and a sensuous vocal.

“Art Bitch” and “Meeting Paris Hilton” amply demonstrate that this isn’t an album to play to the kids though. Try as you might, it’s hard not to sing along to Lovefoxxx screaming 'lick, lick, lick her art hole' and the infectious 'woos' and 'heys!'.

But if we had to pick one track that really makes Cansei De Ser Sexy the album that is is, “Music Is My Hot Hot Sex” would be it. A low-slung bass coupled with Adriano Cintra’s r ’n’ b drumming provides the rhythmic force behind this, the band’s musical manifesto, as Lovefoxxx wails that 'from all the drugs, the one I like more is music'. Now that's an addiction that makes perfect sense... 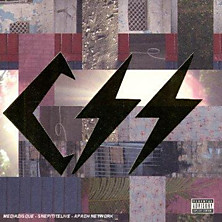