Black Faction are a breed apart from the average electronica outfit. Their dark, expansive soundscapes have an edge and drive that puts them firmly in the kind of lineage that stretches from the 'industrial' experiments of Zoviet France to the brutal electrofunk of Cabaret Voltaire through to the ethnodub of Muslimgauze.

Last years Internal Dissident (released on the highly individual Soleilmoon imprint) showcased Diey's skill as an engineer of atmospheres. Based loosely on Dante's Divine Comedy, much of the album's hallucinatory power derived from Diey's use of speech and'natural' ambience(his day job is as a sound designer for radio and TV); the phrase 'invisible soundtrack' has become a bit of a cliche these days, but at its best and most abstract, Dissident was a strikingly visual, stygianwork, best listened to with lights off.

Remix projects are two a penny these days. Often the remix bears little or no relationship to the original (Richard D James is rumoured to have duped curators of such projects by simply giving them some of his unused material and passing it off as a remix) and the results are patchy and incoherent. Diey has chosen his remixers for Reworked with care, adding sound design touches to many of the mixes, and has sequenced the results with his trademark narrative approach.

The outcome is an album that feels like an album rather than a compilation. The remixes (including Diey's own) reign in the occasional excesses of the originals. Universal Delux offers superbly beefy Laswellian dubhop without the flab; Rapoon (Zoviet France's Robin Storey) and Keith Fullerton Whitman (aka Hrvatski) slowburn their raw material into threateningsulphurous heat haze; Sutekh's "Oakland Concrete" is scratchy basstronics, full of earcatching abstractions. John Hudak's short granular reworks eddy the originals into beautiful powdery swirls; throughout Diey's atmospherics add rich, deep space backgrounds.

If shivers down your spine are what you're after, this is prog gothic ethnoforgery electronica at its finest. Recommended. 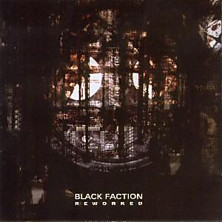