Surprises and enlightenment come thick and fast in this presentation of Scottish culture.

Scotland at Night is the result of an artistic collaboration between Scottish composer Tom Cunningham and similarly native poet and novelist Alexander McCall Smith. Surprises and enlightenment come thick and fast in their presentation of Scottish culture, the range of musical styles, and the composers on show.

The pair’s own brace of song cycles, Scotland at Night and The Painter's Eye, are joined by the work of others and, whilst it isn't so extraordinary that Scot James MacMillan has set verses by Robert Burns, for Estonian composer Arvo Pärt to have done so feels slightly more surreal.

Cunningham and McCall Smith have obviously endeavoured not just to provide a nicely atmospheric programme, but to also have a stab at plumbing the depths of the Scottish psyche. Their chosen texts bring together the disparate forces of geography, national experience, language and emotional hardwiring, and an accompanying booklet includes translations of the less-guessable Scots words. The mood throughout is quietly contemplative, but within that parameter there’s a wide range of styles on offer; Cunningham's two song cycles are particularly evocative of the folk strains of Scotland, mixing a straight tonal sound with humorous little harmonic surprises.

Those familiar with MacMillan's work will spot that he's taken the ethereal layering of voices he uses to such effect in his sacred music to create similarly satisfying textures here, but with little Scotch snaps and folky modalities. His two settings, So Deep and The Gallant Weaver, are both highlights of the disc. Then, there is Pärt's minimalist setting of the bleak My Heart's in the Highlands for alto solo and organ, beautifully sung by Beth Mackay.

Laudibus and Mike Brewer are particularly good at creating vocal effects, meaning this programme is tailor-made for them. Their rich lower body of voices and silvery sopranos combine beautifully in So Deep, the rippling of Trout Loch is perfectly done, and they've had a good crack at the breathless excitement of Ceilidh (albeit rather perfectly – it would sometimes be nice to hear Laudibus let their hair down a little more in certain places).

All in all, great stuff. 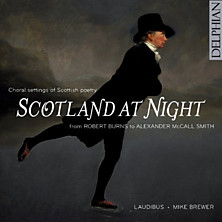