A plain and forgettable affair that falls short of expectations.

As far as Bollywood music composers go, Sajid and Wajid Ali have had their share of hits. Producing soundtracks for blockbuster comedies such as Dabangg, Partner and most recently Housefull 2, the brothers have grown accustomed to Hindi movie fans humming along to their tunes.

Alas, this may not be the case for Tezz (which translates as "fast"), Priyadarshan’s action-packed thriller starring Slumdog Millionaire actor Anil Kapoor amongst other A-listers. Filmed in the UK and mainly set on board an out-of-control train set on a path of destruction, you’d be forgiven for expecting a tense and dramatic score.

But this is Bollywood and there’s always time to stop off for some romance. Cue the gentle opening ballad, Tere Bina, sung eloquently by current playback king Rahat Fateh Ali Khan. While the song offers a decent melody and lyrics, it lacks the emotional punch delivered by Khan’s previous hits, like Dil To Bachcha Hai and Teri Mast Mast Do Nain, the latter also composed by Sajid-Wajid. The female version by Shreya Ghoshal is equally soulful, but her rendition, plus Khan’s sad version and one other remix, all seem to miss the mark.

Taking the film’s title quite literally, Tezz races along at top velocity and volume, leaving little time for Sunidhi Chuahan to inject any vocal nuances into the film’s main theme. While the perfect choice for this bold number, she belts out Jalees Sherwani’s lyrics as if her life depended on it. Meanwhile in the background, Sajid-Wajid pump it like The Black Eyed Peas, also taking inspiration from Dick Dale and His Del-Tones’ Misirlou, made famous by Quentin Tarantino’s Pulp Fiction.

No full-blooded Bollywood film would be complete without a raunchy item number, and so Laila comes to the rescue with its faux Arabic-Bollywood sound. It’s a meatier song for Sunidhi to sink her teeth into, but its no Munni Badnam, Sheila Ki Jawani or Chikni Chameli, all sizzling songs that have recently raised the bar in this arena.

Mohit Chauhan lends his velvet tones to Main Hoon Shab, the second love ballad of the album. Again, like Rahat, he is let down by mediocre lyrics and a half-hearted qawwali-inspired composition. The end result, for this song, and Tezz in general, is a plain and forgettable affair that falls short of expectations. 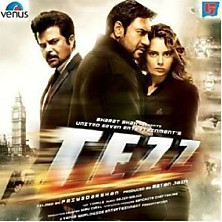