The Hold Steady Heaven is Whenever Review

Blissfully at odds with the compression-heavy world of modern rock.

Despite only coming to public attention comparatively recently, Brooklyn rockers The Hold Steady have essentially bypassed the up-and-coming portion of their career, leapfrogging straight to the elder statesmen phase. There are a number of reasons for this, but the most salient one is the band’s unabashed classicism. It’s verging on journalistically irresponsible not to compare their wordy, propulsive rock to 70s Springsteen; the band have so hitched their wagon to the music of decades past that it seems odd to think that their contemporaries are technically the likes of Shearwater and The National.

This, of course, is precisely why people love them so much – Craig Finn is a great lyricist, a raconteur in the old mould, while there is a barrelling, analogue warmth to their music that’s blissfully at odds with the compression-heavy world of modern rock production. Their records – which tend not to be terribly different from each other – are as much one drawn-out manifesto for how Proper Music Should Sound as actual discreet artistic units.

And this can make it rather tough reviewing their latest offering: you’re either with them or against them, and a new set is unlikely to change that. The big talking point of fifth album Heaven is Whenever is the departure of keyboardist Franz Nicolay, which makes for a moderately leaner record than 2008’s Stay Positive. It still sounds exactly like The Hold Steady, though. The relaxed country twang of first track The Sweet Part of the City is the biggest development, but it’s swiftly forgotten as the following Soft in the Center crunches in on strutting guitars and Finn sounding like the world’s coolest uncle, growling: “Kid, you’ve gotta trust me on this one.”

Elsewhere there are elegant slow-burners (The Weekenders), whiskey-soaked riff-rockers (Rock Problems) and one wonderfully hard-bitten seven-minute epic (the final A Slight Discomfort). In other words Heaven is Whenever is good for the exact reasons Hold Steady records always tend to be good. Such dogged consistency suggests it’s doubtful Finn and company will ever come out with a startling masterpiece that frees them from Springsteen’s shadow, but it also implies they’re extremely unlikely to make a bad record. As you were, gents. 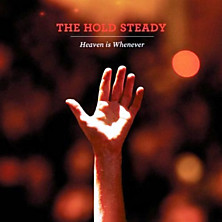