Disappointing fare from Britpop revivalists on the receiving end of critical vitriol.

Sounding every second like the work of men whose formative records were Parklife and Definitely Maybe – and they’re quite possibly the only two records the Slough quartet have ever owned between them – Famous First Words isn’t a debut to hold the weakest of candle flames to either influential LP. The songs here are largely reminiscent of so many 90s Britpop also-rans – inoffensive, unmemorable, lacking any grit or bite – and producer Stephen Street (Blur, The Smiths, Kaiser Chiefs) brings his standard polish to proceedings. But after so much hype for Viva Brother, much of which came out of the band’s own collective mouth, this is a disappointing disc.

Musically it’s sure-footed enough – revivalist fare that ticks enough nostalgia boxes to have anyone whose teenage years took in the mid- to late-90s humming along absent-mindedly – but the lyrics here are pitiful. Truly, there are too many examples of awful couplets, misjudged rhymes and cack-handed metaphors to begin quoting them – and frontman Leonard Newell sounds as if he’s making a great many of them up on the spot, with several lines utterly nonsensical. At best it’s wholly uninspiring stuff, lacking heart and delivered with all the soul of a karaoke first-timer desperate for the loo; at worst, it’s like grotty scrapings from the crevices of a certain Gallagher brother’s grey matter, every snarl disguising shortcomings like a tatty string vest protects one’s modesty.

But is Famous First Words really worth the critical mauling it has received from certain sectors of the music press? Given the pre-release headlines, perhaps; but once the listener has distanced themselves from the column inches, perhaps not. It’s a debut for starters (typically far from the definitive statement from any outfit, barring tragedy or disbandment), clocks in at a commendably lean 34 minutes, and there are flashes of nod-and-noodle-along accessibility which suggest Viva Brother could deliver something at least on a level with the fourth Cast album come collection number two.

If they get the chance to make it, of course, as so savage has the reception been to this set that it’s likely that Viva Brother will be buried before the band has got anywhere near their claim to be the "future of music". If only its makers had kept their mouths shut, flicked through a dictionary and soaked up Blur’s eponymous offering, instead of offering themselves as willing lambs. 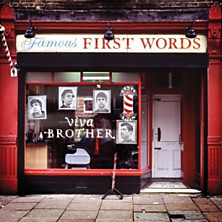