A brilliant album from one of the finest groups to have ever walked the Earth.

Originally released in 1989, Technique rounded off New Order's first decade of operation in style. Having gone from their post-Joy Division fumblings via defining classics such as Blue Monday, and having a big proper hit single with True Faith, Technique is the sound of them heading down the rave-up and immersing themselves in the power of disco again. That it came at the beginning of what became known as Madchester could only help matters, and pointed the way ahead for indie herberts to suddenly locate their dance elements, and even 20 years on, you can bet The Killers – well, they did take their name from a NO video - may own this album too.

The brace of singles released from the original album – the acid-bonkers incomprehensibleness of Fine Time, the pure sumptuousness of Run and the house nation of Round & Round – epitomise the collection perfectly, although that's not to say they were by means the strongest tracks. There seemed at some point during this period the band had entered into a weird battle trying to out-Cure The Cure - albeit without the frightwig and wonky lipstick – most evidently on Guilty Partner and the Just Like Heaven-esque All The Way, while Vanishing Point is hands-in-the-air euphoria housetastic. Here was a New Order ready for the next decade, adding to their already superb reputation. Sleek, driving and built for the (cough) nineties, but in reality and retrospect, this was their last truly great album, as 1993s over-polished Republic and 2001s Get Ready now seem like autopilot versions of their pioneering template.

This deluxe edition adds further dimension, with disc two containing rare mixes, and ending with a remix of World In Motion. As it turns out, there have been some issues raised with the quality of the reissue programme, with wrongly labelled remixes and some tracks have been remastered from vinyl. But! what ever format floats your boat, Technique itself is still a brilliant album from one of the finest groups to have ever walked the Earth. 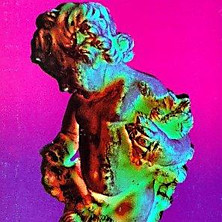