Hannah Everything Is Changing Review

It's not every day a singer from Estonia comes along to Britain. In fact it's unlikely any of us have ever even heard an Estonian singer except when watching the Eurovision Song Contest. Hannah plans to change that. Famous enough in her own country to not need a surname, and with the country's best selling album ever under her belt, Everything Is Changing is her debut international album, but the 6th in her career.

She started as a vocalist on a TV choir, aims to combine pop with a mesh of classical and cites her favourite artists as The Corrs, Travis, U2 and Frank Sinatra. Alarm bells are already ringing to alert us to the fact that this might not be the most interesting of albums. Instead it's a solid, wholesome pop album filled with midtempo tracks. It's not going to cause any offense but it's certainly not going to send you reaching for the repeat button on your cd player.

Title track "Everything Is Changing" is a warm ballad where Hannah remembers her life as a child and wonders why it's all so different now. A soaring chorus accompanied by a careful piano melody make it a very radio friendly track. Equally "You Are", albeit with a much more uptempo chorus, could happily sit on the Radio 2 playlist with ease.

"I See" is where Hannah's Corrs influence is most obviously recognisable - even her Estonian accent sounds a bit Irish! A sharp string introduction makes it stand out from the rest of the mundane tracks and a killer chorus means it might stay in your head for more than the 3 seconds nearly everything else on the album will. There's nothing wrong with smooth middle of the road pop; Michael Buble does it majestically but he has the help of some killer hooks. Hannah sadly doesn't. Everything Is Changing is just too bland for a cynical, 'sophisticated' British market, and frankly with the likes of Robyn, Linda Sundblad and even last year's Estonia Eurovision entrant Gerli Padar knocking about, we expect more balls from our European pop stars.

Wogan'll love it, heck Ronan would love it! But the average pop fan? No chance. 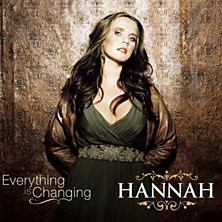