A debut which is both intriguing and exciting if a little uncomfortable.

''We make pop music, but pop music that isn't comfortable'', declares MGMT leader Andrew Vanwyngarden. You can say that again. Talk about eclectic. This Brooklyn duo have got more tricks up their sleeve than Pete Doherty has court appearances. But first some background: For those unfamiliar with New York's latest synth-sters basically all you need to know is that both Vanwyngarden and keyboardist Ben Goldwasser first bonded over their love for My Bloody Valentine and Spacemen 3 at Connecticut's Wesleyan University back in 2002. Since then they have signed a whopping record deal with Columbia thanks to legendary U2 producer Steve Lillywhite and they're currently making huge waves across the States. Their debut album, Oracular Spectacular, has been constructed or in their case de-constructed by The Flaming Lips producer Dave Fridmann and their lyrics are inspired by The Mayan Prophecies and conspiracy websites.

Now back to the issue of uncomfortable pop music. Undoubtedly there are times when Vanwyngarden and Goldwasser stretch the boundaries of pop to breaking point on Oracular. But synth-drenched opener Time To Pretend ain't one of them. If anything MGMT's spine tingling lead off track couldn't be easier on the ear if it tried, as the pair poke fun at rock star dreams about marrying models, scoring drugs, "living fast and dying young".

Next up is Weekend Wars, a psychedelic pop ditty smattered with acoustic strings and Vanwyngarden’s Jagger-esque vocals. Elsewhere, Electric Feel comes on like Prince holding a gun to the heads of French funksters Daft Punk while Vanwyngarden and Goldwasser seductively croon: “Ooh girl, shock me like an electric eel/Baby girl/Turn me on with your electric feel”.

Then comes the uncomfortable second half. Gone are the synth driven bass lines and disco beats and in come surf guitars and quivering vocals. Not that this is necessarily a bad thing. Indeed this works to MGMT's advantage at times particularly on the galloping 4th Dimensional Transition. But when the Brooklyn wizards delve into space folk territory (The Handshake, Future Reflections) towards the end of the album, their uncomfortable pop template sounds forced.

Even so in Oracular Spectacular MGMT have delivered a debut which is both intriguing and exciting if a little uncomfortable. 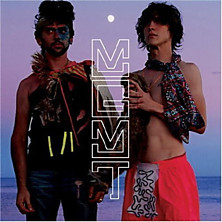