She can hold her own with the majority of her peers.

Should there be an Adele- or Duffy-shaped hole in your life right now, Roxanne Tataei might well be the new kid on the breezy pop-soul block to fill it. The south Londoner’s debut album doesn’t shine in quite the same way as introductory sets from the aforementioned, and certainly isn’t close to equalling the modern era-defining work of Amy Winehouse, but it’s a pleasant enough collection that, at its highs, showcases a young singer bursting with potential.

When Memoirs hits these peaks it’s never less than tremendous fun. My Baby Left Me might tell of a lover walking out the door, but it’s so catchy of chorus that any undertones of romantic breakdown are overlooked in favour of bopping along merrily. It’s the kind of song that should be heard drifting from open windows, of both car and home, this summer, if the chart gods were feeling a little RnB’ed out. (As it is, the song only made number 91 when it was previously released – but it certainly deserves another crack.) No Going Back is another great number, Rox performing powerfully atop a Hammond-driven arrangement that seems to sound both archaic of design and cutting of edge at once. The snappy percussion on Page Unfolds keeps proceedings sharper than expensive tailoring, and Forever Always Wishing slows its step, picks up an acoustic guitar and turns in a ballad to remember.

Rox comes unstuck, though, through a predictable-enough lack of consistency – like many a debut, Memoirs doesn’t know quite where to settle style-wise, veering from excellence to excruciation. Heart Ran Dry retains the acoustic element of the preceding Forever Always Wishing, but is more sketchy X Factor audition than a track worthy of making any album’s final cut. Given a little oomph it could well have been a standout selection – but in this skeletal presentation it gives Rox’s voice too much space to fluctuate. And when she aims for the higher end of her register, it doesn’t always end happily. A couple of efforts are too close to Pixie Lott for comfort, and Rocksteady is a completely wrong turn, taking Rox into reggae territories without anyone studying the prerequisite guidelines for avoiding the pitfall of sounding like a cringe-worthy novelty record.

But said flaws aren’t ones that can’t be addressed. Rox should move forward confident that, when the material’s right, she can hold her own with the majority of her peers. 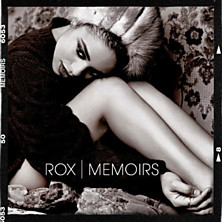