A collaboration that makes sense, with excellent results.

First, a little background. Kenny ‘King Creosote’ Anderson is a Fife-based singer-songwriter and patriarch figure of a loose conglomerate of folk-inspired musicians, the Fence Collective. Architect of a good three-dozen records since 1998, mostly self-released, but some appearing on bigger labels – see 2005’s KC Rules OK and 2007’s Bombshell, which saw the light on 679 Recordings – his style is so intimate, low-key, but often surprisingly affecting songs that accrue a real emotional weight.

His collaborator here on Diamond Mine is one Jon Hopkins, a graduate of London’s Royal College of Music who has worked on a couple of big projects recently: he contributed keyboard and sound effects to Coldplay’s last album, and collaborated with Brian Eno, composing material for the ambient pioneer’s 2010 album Small Craft on a Milk Sea. King Creosote has none of the stadium bombast of Coldplay, or the experimental tendencies of Eno – but all the same, this is a collaboration that makes sense. Both share a taste for a rather languid tempo, that of small-town life and the more tender, bittersweet emotions; and theirs is a pairing that’s complementary, Hopkins colouring in the spaces around Anderson’s wearied voice, guitar and woozy accordion.

It starts with a splash of such colour in the shape of First Watch, a field recording of a bustling café, spare piano slowly picking its way round the clink of cutlery and the counting out of change. This segues into John Taylor’s Month Away, which ponders the sorry lot of a sailor, "With shattered boyhood dreams / And not much sleep," and it’s rendered beautifully, strummed guitar and droning accordion slowly subsumed beneath watery ambience.

Aging, and its effects, is a common theme here: Bats in the Attic sees Anderson contemplating his greying temples over sparse drum pads and piano, while Running on Fumes finds him asking "So why do we bother with all this fighting / Especially at our age?" as Hopkins’ choral synths call a troubled note. You sense, though, that Anderson is the sort to sing a sad song to make himself feel better, and it all concludes with the serene Your Young Voice, which fits a familiar King Creosote mould: a paean to his daughter, sung tenderly and gently, to fade. 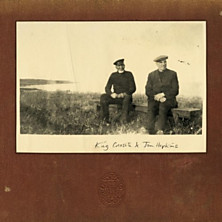