Singer, guitarist and songsmith James Hunter is always dependably excellent, both in the recording studio and when treading the boards of stages on both sides of the Atlantic.

The only reservation might spring from the unchanging nature of his chosen format, although this new session does actually make some attempt to expand the band palette, as well as the scope of some numbers.

The vivid nostalgia remains, with these all-original cuts sounding like they could easily have been laid down back in the golden ages of the 1950s and 60s. In reality they were recorded in Los Angeles with Daptones label co-founder Gabriel Roth.

Blues, soul, rock’n’roll: these remain the Hunter foundations, undiluted soulfulness being the dominant voice. This is an Englishman who has garnered a following in the American heartland of this music.

He’s now working with a bigger band, after taking five years to deliver the follow-up to The Hard Way. Much attention is paid to period detail, these 12 short songs laid down live in the studio, preserving a natural reverb.

The title track resounds with a meaty piano pummel, down in the bass zone, coupled with a slamming snare drum. The horns step forward for Drop on Me, and it sounds like Hunter is strumming acoustic guitar on extended slinker Heartbreak, or perhaps just heavily dampening his electric strings.

Vibraphone imparts a chirpy character to the swiftly trotting One Way Love. There is so much plaintive yearning in these songs, but Hunter always expresses such sentiments with a positive energy that transcends any tendency towards misery, vivifying any bleakness.

Nothin’ I Wouldn’t Do makes a jerky shuffle, and Look Out is one of the album’s best tracks, lurking in penultimate place. If Only I Knew concludes in a reflective ballad frame, with its sensitive acoustic guitar strums, these songs marking a strong triple climax to the session. 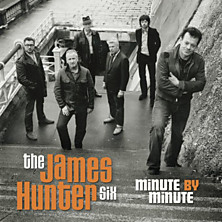