One of the most contented and rewarding albums of his career.

On Free’s, the oddly titled penultimate song on Bill Callahan’s Apocalypse, the singer ponders what it means to "to be free in bad times… and good". Ultimately (despite some misgivings) he seems to embrace his own freedom, or at least recognise it. Because while this record draws from a sparser palette than 2009’s sun-cracked opus Sometimes I Wish We Were an Eagle – and even though it’s called Apocalypse, and is the latest from a singer renowned for his subversive outlook – it isn’t a bleak or downcast affair. Instead it plays out like a grand old Western, wherein Callahan contemplates his role and heritage against an untrammelled American landscape of the kind that constitutes its rich cover art.

That artwork is a painting by the artist Paul Ryan, though the apocalypse evoked over the course of these seven songs is for the most part Callahan’s own: sitting in a hotel room listening to old recordings he’s made, a flickering television on mute, revelation (not Revelation) colouring his thoughts. This vignette is relayed to the listener in the gorgeous Riding for the Feeling, which could feasibly be interpreted as a paean to the instinctive – his personal rejection of the cerebral. Forty minutes in length, each song winds itself into new and unexpected terrain, whether it’s the sense of grace about the opening Drover gradually spinning into urgent climax, or the hesitant finger-picked shapes of Baby’s Breath faltering and accelerating in accordance with Callahan’s dry, assured delivery.

Yet as Apocalypse wears on – through the wry, funky strut of America! ("I watch David Letterman / In Australia / Oh America!") and unhurried passages of Universal Applicant – it becomes more streamlined. It’s a progression felt most palpably in Riding…, and a completely earned, natural one at that. By the time he’s wrapping things up with the languid One Fine Morning, stabs of piano sit alongside lines like "When the earth turns cold, and the earth turns black / Will I feel you riding on my back?", but the effect is never jarring. Rather, Callahan has gifted us perhaps his most subversive set to date: an album less about apocalypse and ruin than it is upheaval of the positive variety, and one of the most contented and rewarding of his career. 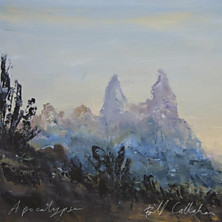