A must for even the most seasoned cumbia hound.

The sound of Colombia’s Caribbean coastline, cumbia is one of Latin America’s most outstanding popular music forms. This influential genre had a major impact on overseas salsa, as well as certain styles of Mexican music, and inspired large audiences in the USA and Europe. The style’s immediate appeal stems largely from its melodic accordion parts (utilising a special tuning, said to have resulted from instruments that washed ashore from a shipwreck), as well as the percussive guacharaca, a rhythmic scraper that provides the most infectious element for dancing feet.

At first listen, cumbia can sound deceptively simplistic, its spacious bass lines anchoring the music to a two-step cadence; but on a closer listen, one can hear all kinds of hidden elements creeping into the mix: hand drums that originated in Africa meld with the flauta de millo, an Andean reed flute (replaced by the clarinet on later recordings). As revealed in the notes of this excellent double-disc compilation, cumbia evolved along the Magdalena River as a unique blend of African, indigenous and European elements, becoming cumbia proper in the port city of Barranquilla; a related sound called porro, from a non-coastal region, is a somewhat slower cousin that places melodic emphasis on swinging brass blasts.

Colombia’s recording industry has a truly rich history, and compiler Will ‘Quantic’ Holland has set out to make the most of it on this compelling set, presenting "the history of Colombian cumbia and porro as told by the phonograph". Astute listeners will already be familiar with Quantic’s inventive productions, but some may not know that he has spent the last four years in Colombia, trawling the nation for its remaining musical artefacts. The startling and eminently pleasing results are displayed here in 55 crucial tracks culled from extremely rare 78s and 45s, and select, long-forgotten LP tracks.

As you are guaranteed to hear music on this compilation you have never encountered before, it is a must for even the most seasoned cumbia hound. But those new to the form will find the set equally delightful, such is the quality of the music collected here. 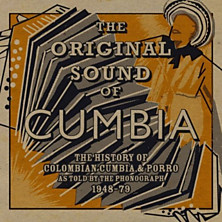