Four Tet There is Love in You Review

Those who’ve lost contact with Four Tet, be aware: the bliss is back.

You have to admire Kieran Hebden for sticking so rigidly to his vision. Back in 2003 the London-based producer made an album called Rounds, which became rather more popular than he’d envisaged due to its winning mix of beautiful, organic-sounding melodies and novel, cleverly-manipulated samples. Radiohead invited him out on tour, tracks from the album began to pop up on everything from sportswear ads to television gardening shows, and Hebden looked set to become a quasi-household name.

Instead, two years on he released Everything Ecstatic, a record that upped the beats-per-minute dramatically in a bid to counteract the unlovely term ‘folktronica’ he’d been saddled with, and any suggestion of commercial intent. Those listeners who abandoned Four Tet at this point may want to give There is Love in You a spin, however, because, as the title suggests: the bliss is back.

Five years is a fair gap between Four Tet albums but then Hebden’s tracks are aural mosaics, painstakingly compiled to work on several levels. The skipping two-step of Love Cry, for example, may appear relatively traditional; but take a closer listen and there are intricacies aplenty, including an underlying synth whirr that sounds oddly reminiscent of the noise Fred Flintstone’s legs used to make when he carried the car to work. This presumably wasn’t the intention.

Even the more straightforward offerings, such as the aptly-titled This Unfolds, gently lull the listener in while sneaking a bewildering array of bells and whistles into the mix, so by the denouement you’re blissfully nodding along to what in less dextrous hands would be a chaotic maelstrom of noise.

There are a few recognisable Four Tet trademarks along the way, notably the chopped-up vocals and general CD-on-the-blink effects of album opener Angel Echoes, which, again, may sound slightly off-putting for those who wouldn’t normally purchase experimental electronica. But the soulful female voice, stuttering and struggling against the onrushing sonic wave, is so affecting that the track’s abstract nature becomes almost incidental.

It’s a theme that recurs throughout the record, and, indeed, that defines the Four Tet canon: mesmeric, melody-laden music, with varying degrees of difficulty. There is Love in You should be a fine introductory course. 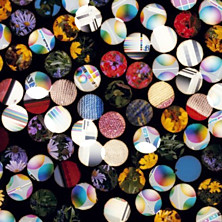