Neu! are often touted as one of the most influential bands of the last thirty years; they've been praised by Julian Cope and imitated by the likes of Stereolab, yet it's only now their three albums have made it to CD after years of legal wrangles and poor bootleg releases. In fact, for a long time it's been easier to get a Neu ! T-shirt than any of their records.

Neu!,their 1971 debut is arguably the strongest record the duo of Michael Rother and Klaus Dinger made; its stunningly reductionist stuff, rock stripped down to its essentials of pulse and texture, arguably predating techno and the whole post-rock movement by a good fifteen years. It's music with no narrative structure, not much in the way of dynamics - it just is.

Elsewhere, "Sonderangebot" is an illbient dronescape of processed cymbals, "Negativland" is a wholseome slice of proto punk squeal featuring Dinger's infamous Japan banjo, while "Weisensee" recalls Meddle era Floyd without the pomposity. All three albums are essential, but if you're (ahem) new to Neu!, this is the place to start. 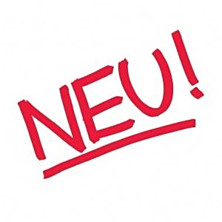