Peter Bruntnell Peter and the Murder of Crows Review

File under 'troubled and autumnal'.

Although everyone thinks he's American, this Kingston-On-Thames native who lives in Devon has been feted by the twang crowd for years, namely from the stomp of his Peter Bruntnell Combination back in the mid-90s, but this something of a different beast. It is hard to believe that Peter And The Murder Of Crows is Bruntnell's seventh album and his first since 2004's Played Out. Moving away from the out-and-out alt.country of yore, Bruntnell has cited his influences here as Bert Jansch and Syd Barrett. Co-written with his Canadian songwriting partner and recorded with Danny Williams on bass and guitarist Dave Little, PATMOC is deep and frequently low-key, and although reminiscent of artists such as Iron and Wine in parts, it's a deeply singular listen.

Using instrumentation such as electric tanpuras, Indian harmoniums and bowed double bass, PATMOC creates its own unusual atmosphere, writ large on album opener, False Start; when, by the third minute, the vocals have dropped away and are replaced with ever-deepening drone-like late summer blues, you know you are on to something special. Cold Water Swimmer follows this theme. It's the economy here that thrills. The wigout at the end of Hash Dream Craving (''It's not worth saving/it's just a hash dream craving'') could go on for at least two minutes – it has been and gone within 30 seconds. Domestico has a lightness of touch and beautiful arrangements.

Peter And The Murder Of Crows would make an ideal starting point for those who've often wondered and fancy a dabble with something both sophisticated and underststed. File under 'troubled and autumnal'. 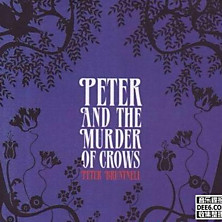