Hield draws out new wit, tenderness and melancholia from these traditional songs.

Rare is the folk album that is comfortable referencing the Neighbours theme tune alongside obscure Victorian parlour music. But, then, Fay Hield is a rare folk singer. Embracing both the intellectualism of the dusty library and the spilt-beer abandon of folk clubs, Hield interprets 11 traditional songs on Orfeo with nuance and verve.

Her 2010 debut album, Looking Glass, was technically accomplished but unadventurous. By comparison, Orfeo is a huge leap forward in confidence and vision. Hield’s day job as an ethnomusicologist gives her the chops to tackle difficult and obscure material, but Orfeo’s success lies in partnering this scholarship with gut feeling.

From the eerie rumble of opener The Lover’s Ghost through to the concluding warped nursery rhyme Naughty Baby, Orfeo is admirably diverse. Desolate songs of chance encounters rub against bawdy vaudevillian leg-flashing.

Few singers could pull off the complicated medieval ballad Sir Orfeo, and then immediately follow it with the feisty Yorkshire stoicism of The Old ‘Arris Mill. Hield does so and, moreover, makes them natural bedfellows. Her exceptional band The Hurricane Party – featuring Bellowhead members Jon Boden and Sam Sweeney, alongside Martin Simpson, Andy Cutting and Rob Harbron – is equally flexible and vibrant.

Unusually for a modern folk revivalist, Hield largely resists highly emotional vocals. It’s what she doesn’t do with the song that’s important, too. For instance, on The Cuckoo, a song of fickle affection made famous by Anne Briggs, Hield never cracks into misery. Instead, she builds up the narrator’s self-defence, and this ultimately gives the song greater power.

This also works well on the subtle The Weaver’s Daughter, pregnant with all the rural tragedy of a Thomas Hardy novel. Most striking of all is the murder ballad Henry. As it moves towards its conclusion, the murmuring drone behind Hield builds to an ominous buzz, before retreating to a whisper, in horror at the final lyrical reveal.

On Orfeo, Fay Hield is a purist in the best sense of the word. She doesn’t seek to graft herself onto these songs; instead, and with considerable skill, she draws out from them new layers of wit, tenderness and melancholia. 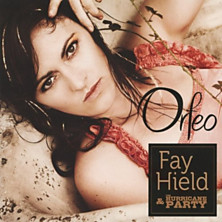