When Howard Trafford aka Howard Devoto helped invent punk rock, he immediately did the most punk thing possible. He quit his band the Buzzcocks as their classic debut EP Spiral Scratch was being released in early 1977. While the rest of the Sex Pistols’ naughty offspring busied themselves with three-chord thrashings, the filth and the fury, Devoto formed a band, Magazine, that sounded like Bond soundtrack composer John Barry conducting Roxy Music, accentuated his bookish intellectualism and eschewed splenetic agitprop in favour of caustic, obtuse and sinister songs about the meaning of life, love, sex and the eternal disappointment that is the stupidity of other people. He became the nerdish anti-hero of literate post-punk boys.

Sadly though, there were never enough of us to make Devoto into the rock star he seemed destined to be. After three great albums (Real Life, Secondhand Daylight and The Correct Use of Soap), one good live album (Play) and one final, confused and unfocussed set (Magic, Murder and the Weather), Magazine split in 1981 and Devoto entered his long wilderness years interrupted by the odd solo project and disappointing collaborations.

The post-punk revival of the last decade finally saw the inevitable Magazine reunion in 2009. Although John McGeoch’s death in 2004 ensured that the classic line-up could not get onstage and beguile old fans and new with a show based around their Real Life debut, Devoto, Dave Formula (keyboards), John Doyle (drums) and Barry Adamson were joined by Devoto’s Luxuria guitarist Noko. The success of the shows ensured the arrival of No Thyself, the first new Magazine album in 30 years and a powerful reminder of why the Devoto cult has endured.

But Magazine were always a vehicle for Devoto’s gnomic humour and a speak-sing voice that veered between amused croon and panicked yelp. His chief theme here is old age and encroaching mortality (Devoto is 60 next year) with the likes of The Worst of Progress…, Holy Dotage, Of Course Howard (1979) and Final Analysis Waltz poking self-deprecating fun at the inevitability of physical decay and the clichés of defining one’s legacy. He relishes playing the dirty old man on the near-pornographic Other Thematic Material, defiantly reviving the creepy sexual threat of Magazine’s greatest song Permafrost.

Devoto is also probably the only songwriter brave enough to laugh darkly at rock’s most legendary suicidal stars. Hello Mister Curtis (With Apologies) sees him doff an ironic cap toward his Manchester punk contemporary Ian Curtis and 90s grunge successor Kurt Cobain, paying off in a punch-line which makes the titular apology into a typically double-edged offering. "But I’ve made my decision / To die like a King / Like Elvis / On some godforsaken toilet"; and then the mordant refrain: "I hope I die before I get really old."

No Thyself is less about Howard Devoto refusing to grow old gracefully, and more about the unsung genius asking darkly comic questions about what that cliché means. The surprise excellence of the songs and the music makes this the long-overdue fourth great Magazine album. Thirty years ago, Howard Devoto sang of wanting to burn again. And here he is, doing exactly that. 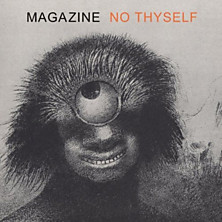