Avoiding a lapse into mid-career safeness, Metric have lots to say, and say it well.

Emily Haines’ Canadian outfit Metric have had the kind of slow-build, long-burn career that many bands would envy. With each of their previous four albums collecting garlands along the way – their most recent, 2009’s self-released Fantasies, netted the band a Polaris nomination, and Juno Alternative Album of the Year and Alternative Band of the Year awards – they appear to have retained their creative impulse along with their audience. Not bad going for a band formed in 1998.

From Synthetica’s opening moment – Haines proclaiming “I’m just as f***ed up as they say” – it is apparent that this is not a band gently lapsing into polite mid-career safeness. The tone, in fact, is often more that of an alienated adolescent, with Artificial Nocturne’s tales of “an outsider’s escape for a broken heart”, or single Youth Without Youth’s slightly overegged attitude: “We played Rubber Soul with the razor blade.”

More positively, there’s also a strain of empowerment running through the album. Dreams So Real muses on the importance of influence, helping others to “believe in the power of songs (…) the power of girls” and of keeping going in the face of indifference: “I’ll shut up and carry on / The scream becomes a yawn.” The title track, too, appears to be celebrating the importance of independent thought, artistic inspiration and originality: the organic versus the synthetic.

All of these weighty and sometimes ponderous sentiments are, crucially, leavened by Metric’s terrific way with an incendiary tune. Never knowingly subtle in approach, the combination of James Shaw’s guitars, shredding and not above the occasional cheesy riffing, the sometimes abrasive, always assertive synths and keyboards and the band’s sheer melodic momentum marks out tracks like Breathing Underwater as almost heroically epic in feel. Other highlights include the euphoric Nothing but Time and the insouciant Lost Kitten.

By the time the curious, shouldn’t-really-work-but-somehow-just-does Lou Reed collaboration The Wanderlust swings into sight towards the album’s end, any remaining Metric sceptics (‘imperialists’?) are likely to have been converted. It seems that the band still have plenty to say, and the means to say it well. 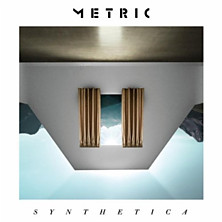