In 2007, Jamie Treays, then a scrappy 21-year-old from south London, released Panic Prevention, a debut that showed a young man in possession of a rare, cocksure talent; a devilish storyteller who might conquer the world, armed with little more than an acoustic guitar and a glottal stop.

Despite impressive reviews and a Mercury nomination, however, the album failed to inspire a wider audience. Treay's problem, perhaps, was that he was paddling in the same estuarine shallows as Mike Skinner and Just Jack — semi-spoken, semi-rapped, skiffley wide boy accounts of modern urban life, full of nights out, loves lost and lessons learned. The pity of it was that neither artist came close to matching his prowess; indeed there are few narrative songwriters working today who can rival Treay — a fact that his second offering only serves to underline.

Kings and Queens is unarguably a more polished performance, the songs grander and glossier than his debut, but happily Treays has lost none of his rambunctious charm; he brings a wit and a wisdom, not to mention an appetite for the faintly grisly, to these tales. At times, he's still the excitable young hoodlum we met on Panic Prevention — in the perky, puppy-dog punk of singles Chaka Demus and Sticks 'n' Stones, for instance. The hooks are irrepressible, bounding in all joyful and unruly on 368 and Earth, Wind and Fire as well as the brawling hip hop of The Man's Machine.

His songs have always displayed a passion for London, for all the rattle and the rabble of the city, but while on Panic Prevention the tales could occasionally stray into the loutish, here on Kings and Queens his writing and his delivery have gained a little composure, as if he's no longer always in the thick of it, but on occasion an inquisitive onlooker. It is perhaps this stance that has allowed a new and intriguing delicacy to creep into his work.

The album's highlight, Emily's Heart, is perhaps the most fragile of his compositions to date, an impeccably-plotted murder ballad, the story of a love besmirched that is, characteristically, deliciously macabre. It is, one hopes, a hint of Treay's work to come — more refined, perhaps, but just as ghoulish and infectious. 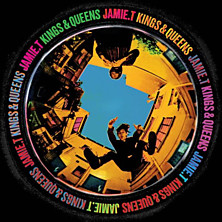