Clear your mind of the kind of 'big-band' Schumann we've become used to hearing over the last half century: this is a slimline Spring Symphony from the 38 piece Swedish Chamber Orchestra, which with its crisp brass and lean, mean string sound is much closer to the feel of a period instrument ensemble. You could argue that Schumann needs a lusher, more romantic sound; that the straight, more-or-less vibrato-free string sound could do with warming up a bit…but in many ways that would be missing the point. In his 'Opening Doors' series of recordings for BIS, Thomas Dausgaard is trying to get us to re-think our way into the world of the early romantic symphony, from the point-of-view of what came before rather than what followed after…and his own interpretative approach helps his argument no end. Right from the opening fanfares, there's a sense of joy and exhilaration, and the openness of the orchestral textures brings freshness and clarity. The ensemble’s lithe flexibility is used to the full by Dausgaard, whose instincts on tempo are persuasive, and the dramatic tension underpinning the work isn't allowed to evaporate. After the verve of the first movement, you might be pleasantly surprised by the relaxed flow of the Larghetto, and a Scherzo that manages to steer its way impressively between Mendelssohnian lightness and Beethovenian weight. The Finale isn’t the headlong dash to the line you'll hear from some period instrument practitioners; Dausgaard takes the 'grazioso' marking at face value, and blends pace with grace, keeping the drama alive all the way to the end.

The couplings are interesting rather than essential: the 'Overture, Scherzo and Finale' that followed the Spring Symphony, and two dramatic overtures: the well-known one from Schumann’s opera ‘Genoveva’…but also the darker shades of the concert overture to Schiller's 'Bride of Messina': closer in its way to Tchaikovsky’s fantasy overtures than what we’ve heard before. There’s also the surviving opening movement from an earlier attempt at a first symphony in G minor: ten minutes of music that doesn’t necessarily enhance your appreciation of Schumann, but in the context of this project helps show you how he arrived where he did. The recording is as transparent as the performances, in stereo or surround sound from the SACD layer.

If you like full-on late 18th century romantic warmth, and the luxury casting of a modern symphony orchestra, this might be the aural equivalent of a cold shower…but it's as refreshing and stimulating as that icy plunge after a sauna, which is something I’m sure these Swedish players would understand. 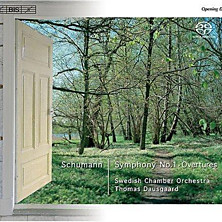