Proves she's a force of nature.

With Hurricane Grace Jones, tosses aside the clubbing hits that launched her onto the dance floor of Studio 54. The vibe that pervades this album is mostly dub. La Jones's latest whirlwind tears up the bass and throws in both a sliver of rock and ever-so-fashionable ska. The work that was begun with Alex Sadkin and Chris Blackwell on Warm Leatherette is taken one step further with Hurricane. Her Royal Graceness is back.

The icon bellows, ''I'll be a hurricane... Ripping up trees''. This is a voice that will rip up anything that stands in its path.

Corporate Cannibal (initially rumoured to be the title of the album) with its macabre chorus of ''I'm a man eating machine'' and mirage of synth and electrics, builds to a carnivalesque frenzy and takes her femina-ex-machine image to the extreme. It also brings back memories of the star's hypnotic performance of Trust In Me at the Jarvis Cocker 2007 Meltdown. Hilariously, she hisses, ''I'll consume my consumers with no sense of humour''.

With its maracas, piano, funky bass, organs, and glorious backing vocals, William's Blood is yet another highpoint on an almost flawless album. It is certainly the most you'll ever rock out to Amazing Grace. The track moves from melodious story telling, to funk to rock to soul and finally right up to the homecoming of the haunting melody named after the singer herself, all telling the tale of a rebel who just can't help herself.

A tender side is revealed in I'm Crying (Mother's Tears) as she eulogises her mother. Is this the sound of a woman softened by age?

The album is beautifully produced - with textures that just make you want to savour and unwrap each track, accompanied by the occasional oddity such as the mouse squeaks that make you question the sincerity of I'm Crying and the rattle creaks on Well Well Well... But then, with contributions from Brian Eno, Sly and Robbie and Tricky, that's not surprising. Acoustically, the album is peppered with reference to previous works - Corporate Cannibal is its own slave to the rhythm.

Grace Jones was accused of being ''socially sick'' in her junior high school report. That may be so but with Hurricane she also proves she's a force of nature. 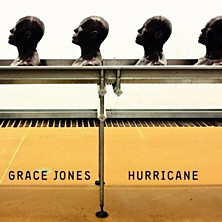